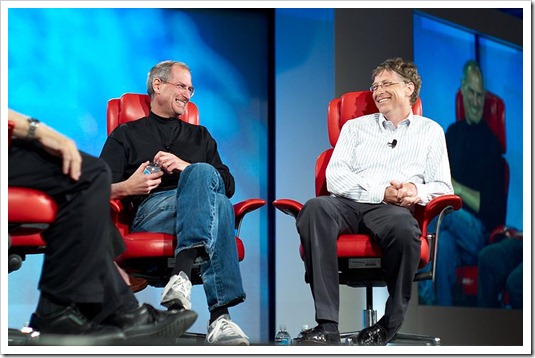 Bill Gates and Steve Jobs Together

Kara: “What you think each has contributed to the computer and technology industry, starting with you, Steve, for Bill, and vice versa.”

Walt: “Bill, how about the contribution of Steve and Apple?”

Bill: “Well, first, I want to clarify: I’m not Fake Steve Jobs. What Steve’s done is quite phenomenal, and if you look back to 1977, that Apple II computer, the idea that it would be a mass-market machine, you know, the bet that was made there by Apple uniquely—there were other people with products, but the idea that this could be an incredible empowering phenomenon, Apple pursued that dream. Then one of the most fun things we did was the Macintosh and that was so risky. People may not remember that Apple really bet the company. Lisa hadn’t done that well, and some people were saying that general approach wasn’t good, but the team that Steve built even within the company to pursue that, even some days it felt a little ahead of its time—I don’t know if you remember that Twiggy disk drive and…”

Quoted from Walter Mossberg and Kara Swisher interview Steve Jobs and Bill Gates at ‘D5: All Things Digital’ conference in Carlsbad, California, in 2007. Quotes made during the time of the photograph.